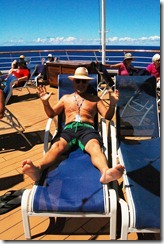 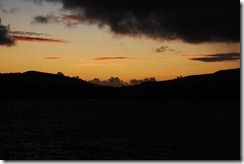 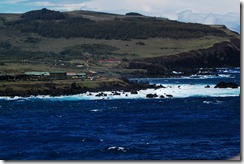 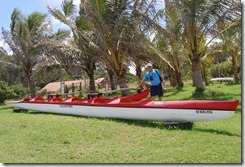 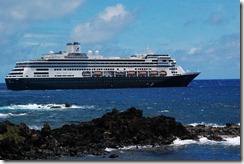 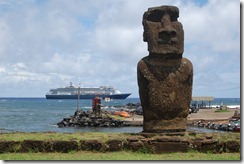 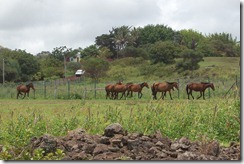 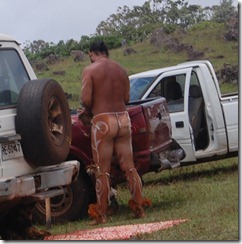 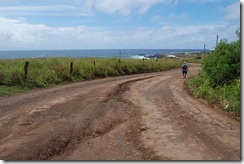 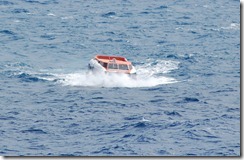 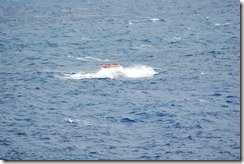 Finally after 4 sea days we arrived at Easter Island, the weather for our crossing had been beautiful no rain, light winds and no major swell.  We arrived at day break to a rain squall, 25 knots of wind and a fairly large sea swell. There is no protected anchorage or harbor on this island, so tendering can get quite tricky.  Captain Mercer informed us he was sending a crew ashore to asses the situation and see if was safe for our tender loading and landing also we had to be cleared by the local customs.  the tender operation goes as such, first they unload passengers who are on a HAL excursion, along with all 4 or 5 star passengers, these are people with 200 cruising days on Holland. Then the rest of us are issued a tender ticket, our is tender #17,when all of the other passengers I mentioned are shore they start announcing your tender # to disembark ashore.  We were watching the tender operation from our balcony and could see it quite challenging to board with the tender  jumping all over in the swell plus it looked it was taking forever to fill the tender. Our cruise director, Bruce, finally made an announcement that the tendering operation was taking much longer than expected and to please be patient.   They started running with 4 tenders, then it went down to two.  One tender had to be taken out of service as when they were rafting next to the ship it was jumping around so much it pulled out one of the cleats. Then they went down to two because it was taking so long to load and unload the third tender was just sitting out in the open water getting bounced around so much.   Finally at around 12:30 our tender was called and away we went.  Now if we thought the tender was bucking when we were down it was nothing compared to when you were actually down level with it.  I really wondered how some of the passengers made it on board with their limited mobility, and I was concerned about my short legs. However once it was turn to board I learned the crew and tender drivers are very safety conscious they waited till just the right to board, no hurrying, safety first.  Now I thought okay whew that was over smooth sailing now we are on our way ashore.  Yikes, was I wrong, the swell when you came out of the lee of the ship was something else, waves were breaking not just over the bow but over the whole tender, I posted some pictures of this above.  The entrance to the harbor is littered with rocks on both sides , the tender pilot really had to be careful and fight the wheel as we rode a swell into the harbor, wow what a ride.   The island itself was larger than I expected  and the city more populated, later I learned a lot of these were tourists, but they were so young!

The big attraction to this island is the Maori statues, there are over 600 spread out throughout the island.  Some upright, others lying on their side half buried, the are  anywhere from 15 to 40 ft. tall.  The big mystery being how did they get them from the quarry to spread-out throughout the island.   The best guess is they rolled them on wooden beams, one of the pictures above illustrates this .

Now for the ride back in tender, the winds and swell had picked up even more, we were picked p at the so called dock, by a tender that was all smashed in on the front portside, with the window smashed out and plastic wrap covered it up.  It seems they hit a rock not very comforting to hear when you are boarding.  What a wild ride back, just like a ride at Disney World.  When we arrived back on the ship we heard Captain Mercer had cancelled all tender operations around 1:30 as the swell was building and two tenders had already been damaged so the people who had afternoon tour were not able to go ashore.  I feel bad for them as this is one of the highlights of the trip.  Only 3 out of 10 ships who stop here at Easter Island are able to make it ashore.  I have to give credit to the deck crew and tenders drivers for getting all of us ashore and back with no one getting hurt.

Hello All….another big one off the bucket list. Despite the turbulent conditions, the Captain said that not going ashore on Easter Island was “not an option”. As Angie mentioned, only a third of the cruise ships  take their passengers onto the Island because of the ever present swell…so everybody likes our Captain. We did not cover as much of the island as we would have liked because of the slow process of getting all ashore but we saw the main village and many of the iconic statues. We walked about 5 miles sightseeing and despite Angie’s lack of confidence found our way back to the ship…with the aid of my handheld  GPS.

Now…raise the anchor and head west to little Pitcairn island….